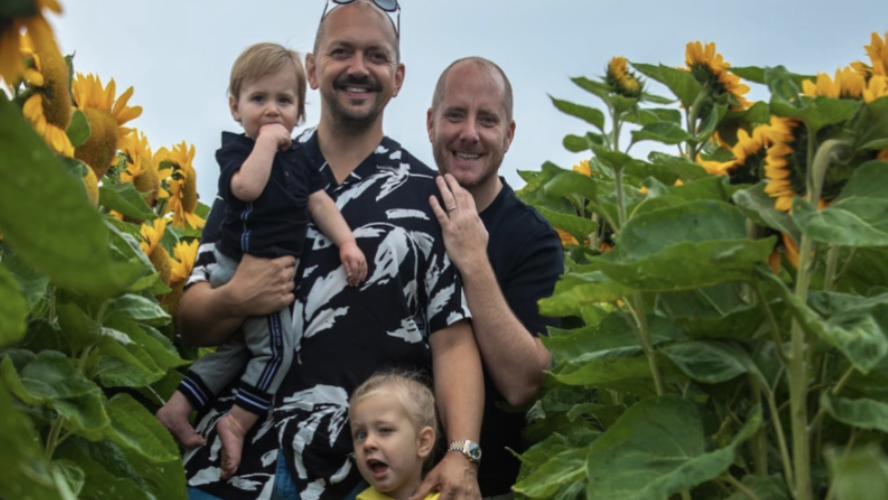 Mr Hudadi claimed that children have become a ‘status symbol’ for gay men, amid a rise in same sex couples and single gay men welcoming their babies

Hudadi commented that there is ‘pressure and expectation’ for gay men to welcome children.  He also continued to add ‘children have in a way, become a status symbol among many gay men, they signify a certain level of time, money and ambition’.

His comments come after a host of famous fathers welcomed children into their brood in recent years include Sir Elton John and David Furnish, Tom Daley and Dustin Lance Black, Ricky Martin and Anderson Cooper

As a father of two, Talulah, three, and Duke, one, (both via Surrogacy) with my husband Wes: ‘Firstly I find the article quite discouraging, objectifying children is never healthy or positive is it really?

As you can imagine – I didn’t hold back.  One of the many things that saddens me about these types of comments is that Heterosexual Parents or straight men aren’t criticised in this way. When a Gay Man wants to become a father, he’s immediately judged for wanting to achieve his dreams of becoming a Dad, and if he chooses to do this via Surrogacy he’s now apparently climbing the social ladder, showing off his feathers to all the other gay non parents!

No parent, gay or straight, goes into a surrogacy journey, which is often lengthy, emotional and occasionally complex viewing it as buying the latest Rolex, or Bentley

‘Viewing family building as a status symbol – whether that’s adoption, which can also be costly in the US, or, like in our case, surrogacy – is not fair on the child. ‘The urge to create your family as a gay man is no different to that of our straight colleagues, that’s where the comparison ends sadly.’

There are still countries that don’t allow gay men to become fathers through Surrogacy.

We should celebrating paths to parenthood, not judging them

Meanwhile I went on to explain that becoming a father was ‘a gift’, saying: ‘For some people in the LGBTQ and heterosexual ‘Trying to conceive’ community, surrogacy is not obtainable at all, which adds additional stresses to either infertility or creates financial infertility, something many gay US men are faced with due to the increased costs of surrogacy.’

Becoming a father in the UK via surrogacy is more challenging than the US, due to the surrogacy laws here, however I, or anyone I’ve ever met with, have never viewed parenthood as a status symbol, more as an absolute gift.

Everyone deserves the right to be a parent, free of criticism and judgement. Sadly the hundreds of comments to the original article on Mail Online, proved we still have quite a way to go as a Community with many criticising gay parenting, several stating that ‘every child needs a mother’ and that ‘gay men shouldn’t be allowed have children’. Clearly our work with TwoDads UK has more work to do.

Michael Ellis-Johnson and Wes Johnson are also the founders of The Modern Family Show, the only UK LGBTQ Family Building Event taking place on the 20th March 2021. Click here for more information